In a TEDx talk, social psychologist Emily Balcetis discussed some research that she and her team had done in the area of fitness and exercise. They wanted to know why some people found it harder to do than others. 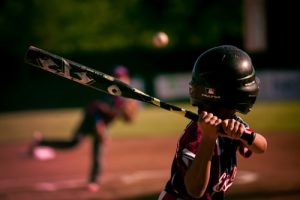 Actually, that's not what they discovered. In fact, the level of fitness didn't even come into it.

Instead, what they focused on mattered most. Those who concentrated on the goal thought it was easier to achieve than those who were distracted by their environment.

Think back to your childhood. Even if you weren't very athletic, you may have tried to play baseball in some form. (Cricket, probably, if your British or live in one of their Commonwealth countries)

Do you remember what you were told to do?

“If you’re right-handed, clasp the bat with both hands, put your right hand above your left, and keep your hands together. Put the bat over your right shoulder, bend your knees, and lean forward.”

What was the last thing your coach always said?

“Keep your eye on the ball!”

And then what happened?

Like most of us, you swung at the ball and missed it.

Because you took your eye off the ball.

Where were you looking?

Chances are you were looking at where you wanted the ball to go. You dreamed of hitting a home run the first time, and even after you swung with all your might, you couldn’t understand how you could miss the ball.

If you ever developed any proficiency in that game, then you learned that you had to see the ball hit the bat. You had to watch it, because the ball had no chance of going where you wanted it to go if you didn’t hit it, and you’d never hit it if you didn’t look at it.

This illustration has ramifications for anything that you do, whether it's in business or in some other pursuit.

In order to achieve your goals, you have to keep your eye on the ball.

It’s that one thing you’re trying to accomplish; the end goal.

Dr Balcetis discovered that you have to focus on where you want to go; not the process of getting you there, and not anything else that might be interesting along the way.

In fact, you have to focus like a laser.

A laser is effective because the light is concentrated into a pinpoint. A 6,000 watt laser can cut through a 1/2” steel plate, but 60 100 watt light bulbs will just make a room bright and perhaps warm it up a little if it’s small and well insulated. The thing that makes that laser powerful isn’t its potential, but is in its focus. It’s energy isn’t scattered all over the place.

Like many things, however, the elegance of science doesn’t seem to translate very neatly into our lives. Instead, it’s just a nice theory.

Sometimes, no matter how hard you try, you just can’t seem to give your work the concentration that’s needed.

There can be a lot of reasons for that, but they can all be summed up in one word: Life.

You may be thinking of other things, you're hands might be cold, it might be the end of the day, or there's a dog barking outside. Some days, little things bother us more than they do on others, and we just can't seem to get past them.

The thing to do when that happens is to take a step back. Stepping back may mean going for a walk, making a hot drink, or sitting quietly for a few minutes. Sometimes all you need is a chance for your brain to breathe a little.

Then, after you’ve collected your thoughts, so to speak, and your mind has settled down, you can think about the next step.

What things cause you to take your eyes off the ball?

Would you like to discover what’s really holding you back?